With a name like RIBS you wouldn’t expect a horse to be big, but his trainers know he lacks nothing in toughness. The Goulburn galloper looks in for a meaty campaign if his first run back from a spell is anything to go by.

The Roadhog gelding showed a five-month spell had done him no harm after a game first up display at Canberra with a big weight.

The horse steps out at the same venue on Friday looking to go one better for the Twin Star Racing set up operated out of Goulburn by sisters Emma and Lucy Longmire.

RIBS delivered a break out debut campaign for the stable back in the Autumn, notching a win and two-runner up results at his first four starts.

At his first campaign the galloper showed plenty of natural speed delivering a number of spirited on pace displays. However, first up at Canberra he showed he may have learnt a new trick or two when settling back in the field before hitting the front late in the race only to be claimed in the last few strides.

Emma Longmire was pleased to see another dimension to the way the horse can be ridden this time in.

“We were particularly pleased with his first up run, he showed he can be versatile settling back and finishing off or ridden on the speed as well. With the wide draw, we felt it was the right time to ride him quiet, as we are keen to get him over a trip,” Ms Longmire said.

The horse tackles a higher grade of race on Friday but his training team believe he can continue the consistent form he’s shown to date.

“He has come through the run well, despite the big weight. Although he is not very big, he is tough.”

Apart from the added fitness derived from his first up run the gelding should also appreciate a six-kilo turnaround in the weights this time, something not lost on his trainer.

“He will benefit from the weight relief, he gets in nicely at the weights for this race.”

And the Longmire team believes he can keep improving this time in for connections.

“We are looking forward to him stepping up in trip, he has shown us he is ready. He is also Bobs extra qualified, we would like to give his supportive owners the benefits of this bonus.”

Despite having a few quirks to his nature, the Longmire team think RIBS can continue racing in very competitive fashion wherever he goes.

“Due to his previous behavioural issues, we have kept him racing locally, although he is now at the point where we feel we could look towards a Highway Handicap race and beyond.”

The stable also has one start maiden Wild Duchess going around in a maiden handicap over 1300m at Canberra.

The stable has twenty runners in work at present and the twin sisters’ training partnership has been operating out of Goulburn since the start of April.

(image for illustrative purposes only)

Runners Up Ready to Step Up (Goulburn – Friday) 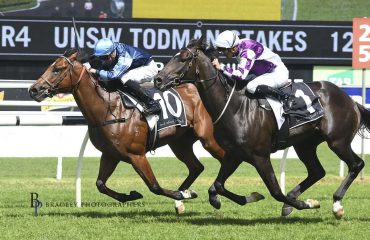 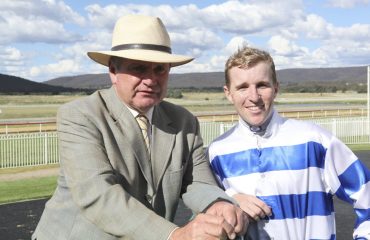